save our sea turtles

The Cairns turtle rehab centre is a voluntary-based, non-profit organisation where sick and injured turtles are treated.

After the floods in late 2010 and Cyclone Yasi in January 2011 there has been an 800% increase in Turtle strandings along the Queensland coast. Depletion of sea grass beds from natural disasters and and an increase in the incidence of floaters disease and Fibropapilloma tumours has led to this increase.

The Cairns Turtle Rehabilitation Centre was established in 2000, however with the increase of sick and injured turtles it became apparent that the Cairns centre was not big enough and a new facility was required. The new Turtle Rehabilitation Centre located on Fitzroy Island officially opened in early 2013. This new world-class facility with more room, cleaner water, bigger tanks and an Education Centre has raised the success rate for the rehabilitation of the turtles from 30% to 85%, and is now one of the highest success rates in Australia.

The Sea Turtles are brought into the Cairns rehabilitation centre from the Great Barrier Reef and Cape York Peninsula. The most common turtles we see through the rehab centre are the Green turtle and Hawksbill turtle, these turtles can stay in the centre anywhere between 6 to 24 months until they are healthy enough to be released.

Many of the turtles are brought into the rehab centre with an illness called ‘floaters syndrome’ which is an obstruction that occurs in the turtle’s gut causing air to become trapped between the shell and the body, impacting the animal's ability to dive down to the sea grass beds in order to eat. If these turtles are not found they end up starving to death.

At the rehabilitation centre the turtles are fed daily, when the turtles first arrive at the rehab centre their individual food bill is about $150.00 each week. Sick turtles will spend at least 6 months to recover, some even years. Once the turtle has made a full recovery, a satellite tracker is attached to their shell and we follow the movements of the turtles.

Educational Tours are held on Fitzroy Island every day at 1pm (not on a Friday when the vet visits) and are also subject to availability,  please contact Fitzroy Island Resort reception to make a booking. 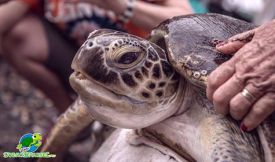 A stranded Green Turtle initially rescued by Mission Beach Charters became a patient at the Cairns Turtle Rehabilitation Centre. She was suffering from starvation, a common condition seen in rescues in recent years due to the diminishing sea grass beds which are the green sea turtles’ food source.

Local Reef Tour Operator Reef Magic became a sponsor for the patient naming her "Magic". Sponsorship contributes to the protection of turtles providing funds towards the food bill of the turtle patients. After spending her time fattening up in Tank 1 at Tingira Street, Magic was the first turtle to be released with a tracker. We are following Magic's movements and hope she will reproduce in large numbers. 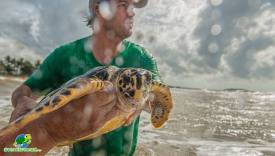 A current long-stay patient at the turtle hospital has been a young hawksbill named Hooker, after he was located at Cowley Beach by indigenous rangers, having swallowed a hook and fishing line – and suffering severe internal injuries after passing it through his digestive system.

"Hooker" was released in June 2014 at Cowley Beach. The Mandubarra Aboriginal Land & Sea Rangers organised a BBQ & drinks plus a traditional Aboriginal Ceremony to wish Hooker all the best.

Ava was the sweetheart of the Fitzroy Island rehab centre well known for her sweet demeanor and coy personality. After 18 months in rehab Ava was finally released back into the wild, becomming the 4th turtle released in 2014 to carry a satellite tracker funded through the 2050 Reef Trust, Reef Management Plan. Ava’s satellite data will add to the research collected so far on behaviours and activities of post rehabilitated turtles.

Six of the world’s seven species of marine turtle occur in Australian waters, including the:

•   Marine turtles are great survivors, having been present in the oceans for more than 100 million years — since the time of the dinosaurs.

•   The estimated lifespan of sea turtles range from 60-80 years.

•   A resting or sleeping turtle can remain underwater for 4-7 hours.

•   The Leatherback is the Deep Dive record holder of the Seaturtles . They are known to hunt for Squid up to 1000 metres (3000 feet) deep!

•   Sea turtles have the ability to detect the Earth's magnetic field and use it as an orientation cue.

•   All species of marine turtles have the same general life cycle. They grow slowly and take decades to reach sexual maturity.

•   A fully grown leatherback turtle can reach a length of 2 metres and weigh up to 900 kg.

•   Baby turtles take 6-8 weeks to hatch and the sex is determined by the temperature of the nest. Warmer sand means more females and cooler sand means boys.

•   The top side of a turtle's shell is called the carapace. It's made up of 60 different bones and plates that give the shell incredible strength and protection.

•   Baby turtles spend 20-30 years riding the ocean currents before returning to their birthplace to nest.

•   All turtles are omnivores, meaning they eat what they can. Favourite staples include sea grass and jellyfish.

•   Turtles often mistake plastic bags for jellyfish. Since they lack mammalian reflexes, feeding on plastic will block up the airway system and cause a slow and painful death.

•   The longest recorded migration for the green sea turtle was 3979 km, from the Chagos Islands in the Indian Ocean, to the coast of Somalia in east Africa.

•   Raine Island, in the northern Great Barrier Reef, is home to the world’s largest green turtle rookery, with an annual nesting population of 30,000 females.