Fitzroy Island is a continental island that was connected to the mainland over 10,000 years ago. It originates as part of the coastal mountain range of Malbon Thompson Mountain Range located behind Cairns (which includes Bellenden Ker, Mount Bartle Frere and Walshes Pyramid).

When the Ice Age ended (approx. 8,000 years ago) the rising waters from the melting ice caps flooded the valley between Fitzroy and the other mountain peaks. This left it an isolated island. Fitzroy Island is actually the top of a submerged mountain, many people do not realise that their island vacation actually takes place on the top of a mountain! Most of the island's water comes from a natural freshwater spring originating in the Tablelands near Mareeba, and surfacing in the National Park bush behind the main complex. 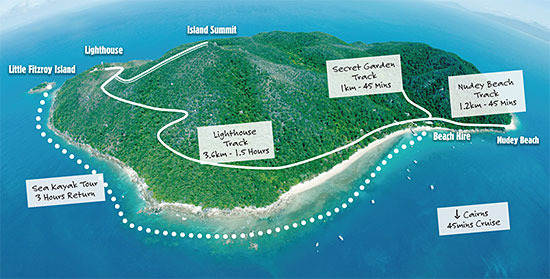 For thousands of years, the Aboriginal people on Fitzroy Island, the Gunganji people, gathered food, and used the area as fishing and hunting grounds. They believe the island is spiritually significant and that a person named Gulnyjarubay named the island Gabara, which means “the fist.” This symbolized that the lower portion of the island/mountain had been submerged and all that remained above water was “the fist.”

In 1770, Lieutenant James Cook named the island Fitzroy after the family name of the Duke of Grafton, who was Prime Minister of England at the time the Endeavour sailed. The point on the mainland opposite (Djilibiri) was also named Cape Grafton in his honour.

From the early 1800s Fitzroy Island was visited by pearling and surveying vessels irregularly until, in the late 1800s, a beche-de-mer (sea cucumber) industry operated from the island. Sea cucumbers were collected and prepared for the Asian food market.In 1876 Fitzroy Island become a quarantine station for Chinese 'coolies' en route to the Palmer River Goldfields. Conditions were poor and starvation, sickness and death were common. Many coolies were buried on the island but the location of most of the graves is unknown.

In the early 1900’s Fitzroy Island became part of the Anglican Aboriginal mission established at Yarrabah and was used to grow bananas, pawpaw, potatoes and cassava. Memories of family separations, attempted runaways, farming the island’s vegetable gardens and attending the coral church are kept alive by the old people of Yarrabah today. The Menmuny Museum at Yarrabah contains displays about the island’s mission days.

Over the years several ships were wrecked on the reefs near Fitzroy Island. The first navigation light, a carbide gaslight, was placed on Little Fitzroy Island in 1923. In 1943, a lighthouse was built on Fitzroy Island providing an important navigational service especially for wartime shipping. The remains of this lighthouse can be seen on the Summit walking track.

The lighthouse on the main island today was built in 1970 and stands on what was once the site of a radar station, established in 1942. The cottages (circa 1960) were home to the lighthouse keepers until the light was changed to an automatic system in 1991.The lighthouse on the main island is no longer in use and the lighthouse cottages are part of the national park. The Number 28 Radar Station, along with coastal artillery gun emplacements on Cape Grafton, served to protect Grafton Passage. Both were disbanded and removed at the end of the World War II. Today’s automated lighthouse is located on Little Fitzroy Island.

Take a hike to the lighthouse via a very steep service road (concrete wheel tracks) that begins from the north-east end of the camping area. A lookout on the windy north side of the island offers views of Green Island on a clear day. From the lighthouse you can enjoy expansive views of the ocean,  and in winter you may be lucky enough to spot an occasional migrating humpback whale.

For 360 degree views of Fitzroy Island take the nearby Summit Track. This boulder-strewn track climbs for 600m through woodland to the summit. From here you can enjoy magnificent views over the island, surrounding reefs and mainland, which make this difficult walk well worth the effort! From the summit, the track then descends for 1.4 km through woodland and open heathland, returing to the north-east end of the camping area. 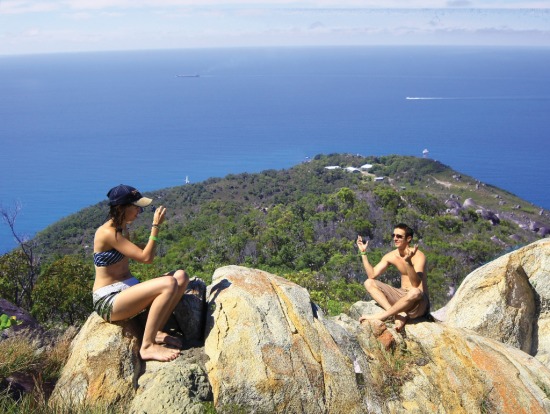 Most of the walking trails were formed during World War War II when the Island was converted into a military base to protect Australia’s mainland from invasion, hence their access to some of the best vantage points in the region. There has been both a Giant Clam farm at Welcome Bay and now a Tourist Resort and day visitor amenities.

The Aboriginal people particularly connected to Fitzroy Island are the Gunggandji People from within the Gungganyji language group.

Gunggandji Country includes the coastal land and waters immediately to the east of Cairns, incorporating False Cape, Mission Bay and Rocky Island, the township of Yarrabah, Cape Grafton, Green Island, Fitzroy Island, the beaches, coastal waters and hinterland south of Yarrabah and parts of the Murray Prior Range to the west. 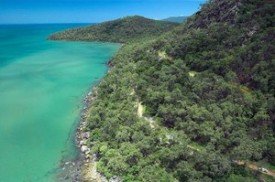 Gunggandji People have been the Traditional Owners of our coastal lands and waters since time immemorial. Our ancestors sustainably used and managed the resources of our land and sea country and they witnessed great changes over thousands of years. 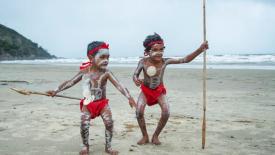 Our traditional stories tell of the rising of the sea and the flooding of large areas of coastal grasslands that now lie under the Coral Sea. Our ancestors withnessed the formation of Green Island, Rocky Island and Fitzroy Island as the sea rose higher.

We adapted our lives, our technologies and the way we managed resources as the environment changed around us. But the land under the sea is still part of the Gunggandji country and we still care for sacred sites and Dreaming tracks that are now covered by the Coral Sea. We continued to adapt as European invasion and settlement gradually impacted on our country, on our resources and our people. We witnessed Captain Cook sail his ship Endeavour into Mission Bay in 1770 and we documented his visit and later visits by other European mariners in our rock paintings.

Our first contact with Europeans was with beche-de-mer (sea slug) fishermen who established fishing camps on Fitzroy and Green Island in the 1850s to 1870s. Some of our people worked and traded with these fishermen, but sometimes we were exploited and treated badly by them. We also suffered raids from the Queensland Native Police who were clearing country for European settlement, but we were largely protected from the worst of the frontier violence by the natural barriers of the Murray Prior Range that separated our country from the growing township of Cairns.

Anglican missionary John Gribble established a mission at the present location of Yarrabah in 1892 with the support of Gunggandji elder Menmuny, who was later made 'King' of the Mission as the leader of an Aboriginal Council that enforced mission rules. John Gribble died soon after establishing the mission and was replaced by his son Ernest who continued to encourage Aboriginal people from the surrounding region to join the mission. Over the next 120 years Gunggandji people adapted to the arrival of Aboriginal people from many parts of Queensland, as well as South Sea Islanders and Torres Strait Islanders who continue to live on our country and share our resources.

Fitzroy Island was part of the Anglican Aboriginal mission established at Yarrabah and was used to grow bananas, pawpaw, potatoes and cassava, but was subsequently excised from the mission and is now a national park.

Gunggandji culture is intimately linked with our land and sea country and all of the environments, places, habitats, earth, water and species that form part of country. Land and sea country as an integrated cultural landscape is reinforced by our creation stories and Songlines that bind land and sea environments together, often reflecting the great changes that took place when the sea rose up to flood our former coastal plains thousands of years ago. For example, the Gunggandji language name for Fitzroy Island is Gulnyjarubay, which means "fist", indicating that what used to be the "wrist" and "arm" of a once big mountain had been submerged by the rising sea. 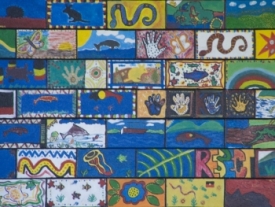